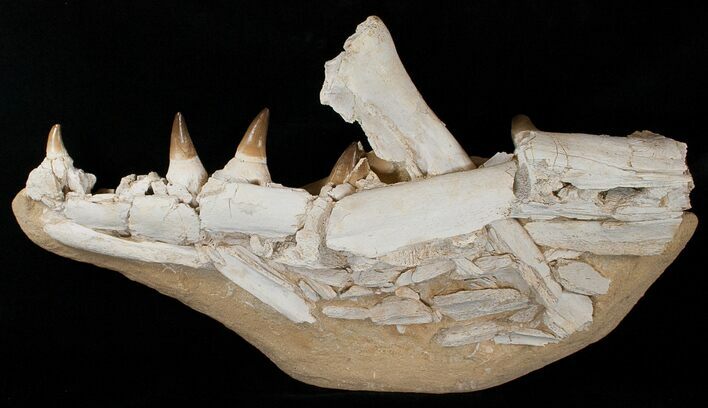 This is a very impressive jaw section of from Prognathodon, a very large type of Mosasaur. It's 22" long, still embedded in it's original matrix and the preparation on it is outstanding.

It's uncommon to find jaw sections with teeth still in place, they are typically remounted or composited during preparation, but not with this specimen. What makes this piece so outstanding, is there is NO COMPOSITING and the only restoration is some of enamel on the second tooth from the left where it had been broken and repaired. There is some stabilization to the back of the matrix. This specimen is in it's natural state, just superbly prepared.

Another interesting feature of this jaw is you can see several of the unerupted, replacement teeth growing inside the jaw. Mosasaur's like dinosaurs and sharks replaced their teeth frequently as they become worn or broken. There were teeth continuously growing inside the jaw bone, underneath and to the side the visible teeth which could move into place when tooth was lost.

If you are looking for a top quality Mosasaur jaw with no compositing and practically no restoration this one is for you. This specimen displays nicely on the included acrylic stand.