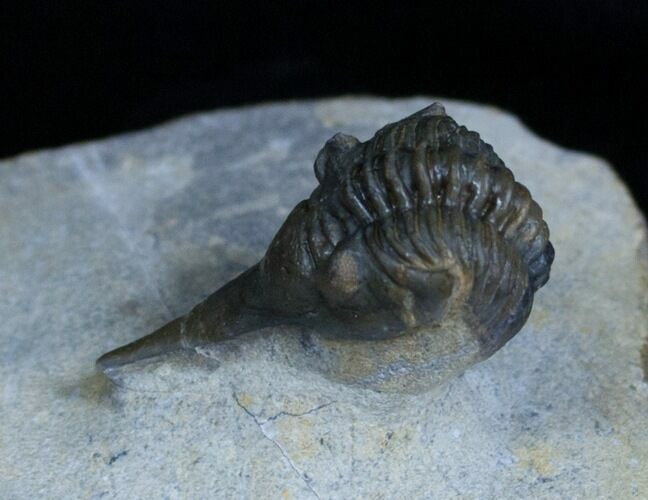 Update: A paper describing this rare new species (and genus) was recently published. So, it's got a name now, Lanceaspis hammondi

This bizarre new species of Phacopida trilobite was just discovered within the past two years. It's most defining feature is an extremely elongated rostrum (nose) which represents nearly 40% of the overall body length. It seems to be related in some way to Morocconites but the rostrum is much longer. The species has yet to be described but work is currently being done on it.

This is an extremely rare trilobite and I've been told by three separate sources from Morocco that the pocket from which they came from was completely dug out this past summer after a huge number of diggers descended on the location. Despite amazing amount of rock quarried only a few dozen specimens were recovered. I have seen a handful of specimens of this species available for sale in the past year with price tags often in excess of $3-4k

This specimen has a repaired crack through the head but NO RESTORATION. I did some of the final cleanup work on the specimen myself and was able to verify this.
More About Trilobites
SOLD
DETAILS
SPECIES
Lanceaspis hammondi
AGE
Lower Devonian