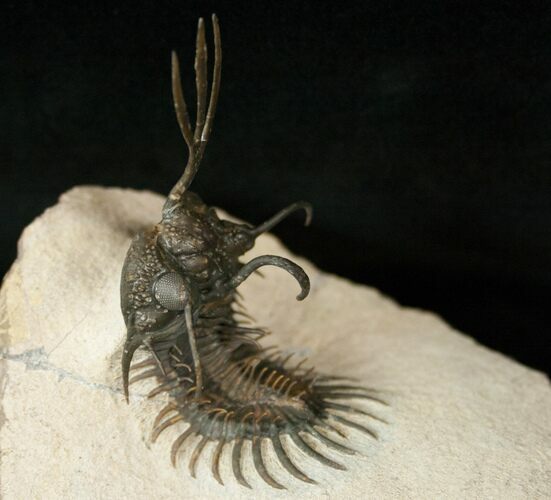 This is a very dramatic Walliserops trilobite from Foum Zguid, Morocco. It's arched backwards and prepared so that it's distinctive trident is pointing towards the sky. Great preparation on this specimen with outstanding surface detail including amazing eye facets. Please note, the fork on it is a composite from another specimen as it was damaged but otherwise there is no restoration on the specimen.

What makes this one so interesting is this appears to be a new variation of Walliserops. There are currently three species of Walliserops described from the same layer of the Timrhanrhart Formation. The long forked Walliserops trifurcatus, a short forked Walliserops hammi and then another one with a odd shaped fork, Walliserops tridens. There is some speculation these may not in fact be distinct species but rather represent sexual dimorphism or variations within a single species.

This specimen though has features of both Walliserops trifurcatus and Walliserops hammi. The is more reminiscent of Walliserops hammi only is about twice the size, but the fork is more like that of Walliserops trifurcatus only shorter. My obvious question for the preparator was he sure the correct fork used when doing a composite and he assured me it matched the damage fork. He was able to provide photos of another specimen under preparation from the same pocket that has all of the same characteristics as this one. This is the last photo in the series. 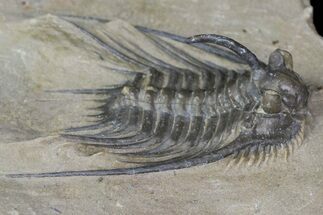