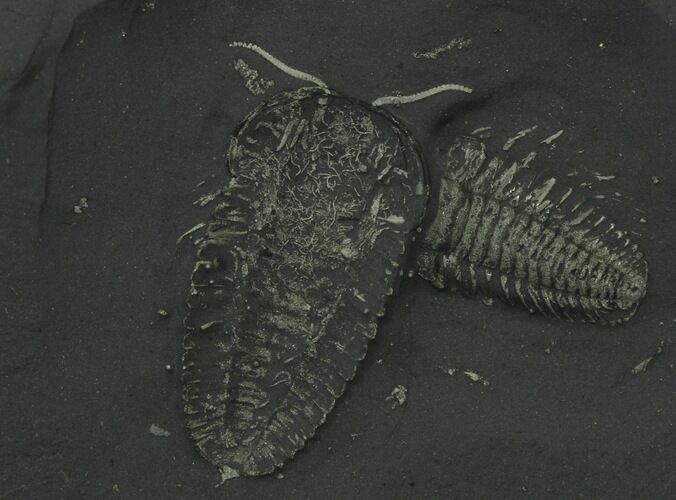 This is an incredible, pyritized specimen of the trilobite Triarthrus eatoni preserving appendages, antennae and even EGGS! Another even rarer aspect of this trilobite is it has an infestation of nematodes or parasitic worms which appear as squiggly lines all over the head. There is currently a paper in the works, probably to be published this year describing similar parasite infestations for the site. This is the only specimen I know of to be made commercially available with such a large scale nematode infestation.

Until recently little had been known about the reproduction of these iconic paleozoic arthropods, and never before have unambiguous eggs or genitalia been found preserved. Trilobites from a single layer of the a quarry in the Whetstone Gulf Formation of New York, were found to have associated eggs still in place. The eggs are spherical to elliptical in shape, about 200 µm in size, and are clustered in the genal area of the cephalon The location of the eggs is consistent with where modern female horseshoe crabs release their unfertilized eggs.

Below is a link to the paper published earlier this month, on this amazing find.

A great article on this discovery can be found below.

The localities that preserve trilobites with soft bodied preservation can probably be counted on one hand. One of these localities is the historic Beecher's beds in the Lorraine Group of NY. Less than a decade ago a new locality was discovered a short distance away that has produced amazing, soft bodied preservation of trilobites and other organisms. Because of the rapid burial of the trilobites, in an anoxic environment the soft body parts were replaced by pyrite preserving details not typically seen.

Preparation of these soft bodied specimens is an immensely time consuming task. It is done under high magnification using extremely low pressure air abrasion. A specimen like this would have taken many hours to complete. 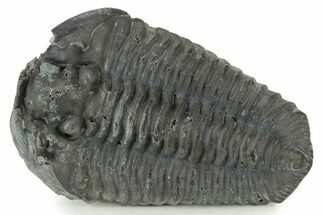 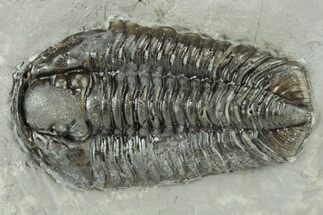