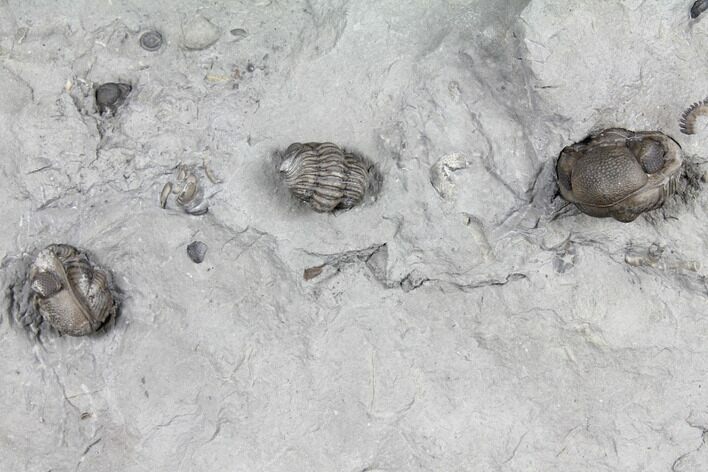 This is a very unique trilobite specimen from New York. It comes from a locality near Darien, New York which produced a small number of "spotted" trilobites, showing unique color patterns. Researchers believe the spotting on the trilobites from this location is the strongest evidence yet that these ancient arthropods protected themselves with camouflage similar to modern day horseshoe crabs.

"Most of the specimens bore spots on the upper surfaces of their exoskeletons, dots about one-hundredth to one-half of a millimeter wide. These spots were often either dark brown circles with relatively sharp boundaries or somewhat lighter brown or tan spots with a thin but distinct darker halo or rim. A few trilobites with darker brown to black shells had tan or white spots instead.

These dots, made of tiny spheres embedded in the trilobite exoskeletons, were not randomly scattered across the surfaces of the creatures — they were concentrated in symmetrical patterns on the surfaces above and below the eyes and along furrows on their backs. The number of spots varied across specimens, from fewer than 100 to more than 500.

Color is only very rarely preserved in such ancient fossils, raising the question of whether the scientists were mistaken in thinking these spots were natural parts on the trilobites' bodies. Supposed dots on the shells of trilobites have been seen and argued over for nearly a century.

However, microscopic and mineral analysis revealed the spots on these fossils were in fact parts of their exoskeletons."
More About Trilobites
SOLD
DETAILS
SPECIES
Eldredgeops rana rana
AGE
Middle Devonian