Native copper is the uncombined form of copper and the natural state of the mineral. It often presents as the typical orange-brown color synonymous with copper, either free of matrix or embedded in calcite. Copper is one of only a few metallic elements to occur in native form, as it most commonly occurs in an oxidized state or mixed within other minerals. The native state of copper typically presents as a disorganized version of a crystal or mass. That isn’t to say that copper can’t form crystals, it just very rarely does. If copper forms as crystals they will either be cubic or a modified dodecahedron. Copper has also been found in compressed plates and dendritic branches. The native state of copper is relatively rare, meaning most of the world’s copper supply is extracted from other minerals. Native copper has been an important ore of copper throughout history and has a variety of uses both industrially and economically. While copper has significant value in industry, specimens of the native variety are also excellent display pieces.
Specimens (41)
Polished (11)
Bookends (1)
Cabochons (1)
69 Items ($5 to $225) 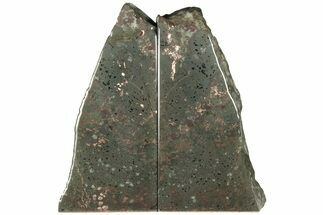 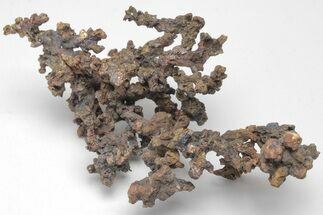 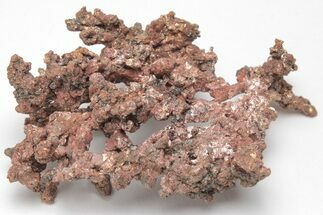 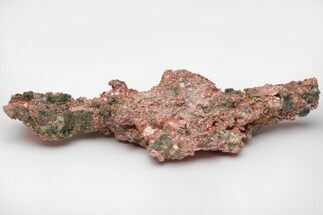 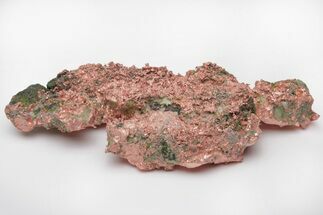 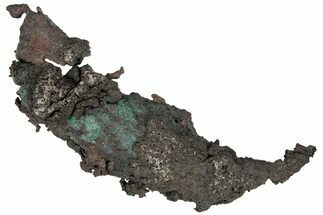 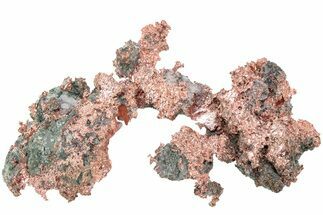 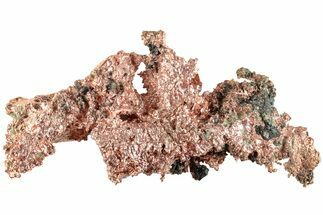 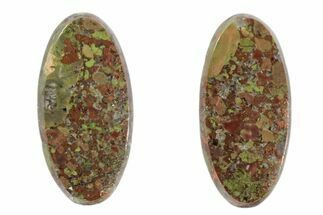 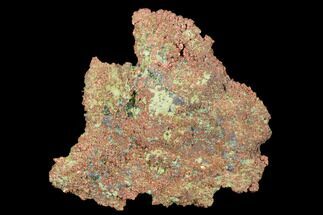 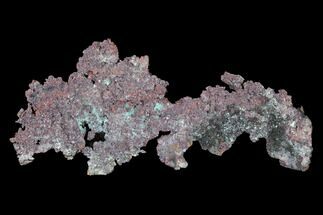 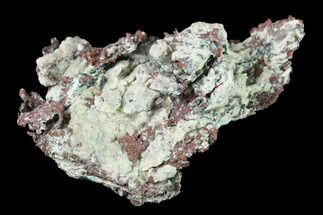 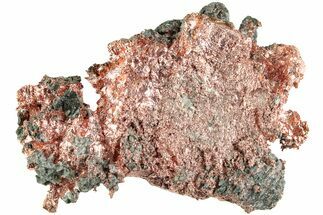 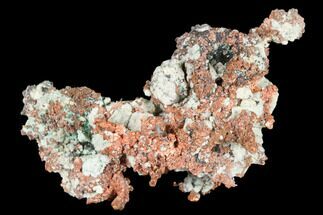 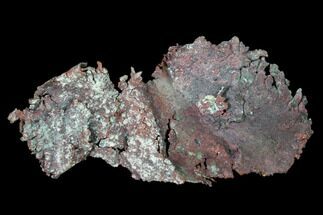 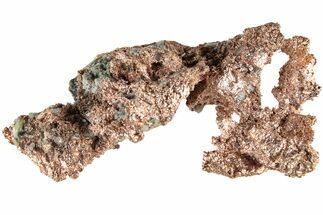 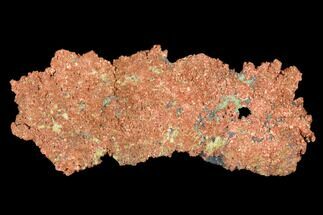 Copper is an extremely effective electrical conductor, second only to silver, and because of this, its primary use is as wiring for electronics. This mineral is also extremely ductile and pliable, allowing for it to remain usable when rolled into very thin wires. Copper is currently one of the most used elements/minerals in the world, because of its application with electronics, specifically in mobile devices. It is estimated that 20 million metric tons of copper is mined globally, each year.

When copper weathers it undergoes a process known as tarnishing. The specific coating is referred to as verdigris or patina and is a crust of copper (II) carbonate, formed during a reaction with air. Most native copper is extracted with varying degrees of patina on it.

Throughout history copper has been used by people for a variety of purposes, from coinage, to art, to weapons. You name it, humans have used copper for it. Copper is used in two important alloys: brass (copper and zinc) and bronze (copper and tin). Each alloy has many important applications. Brass makes for excellent hardware as door handles, due to its antibacterial qualities. Bronze was a key metal that acted as a stepping stone for human technical advancement, introducing mankind to smelting and smithing for the creation of tools and weapons.

Where Is Native Copper Found?

By far the most significant deposit of native copper is found on the Keweenaw Peninsula of Michigan. Mines from this location run along the mid-continent rift and extract the most native copper by volume and some of the highest quality collector specimens. Arizona also has some of the most abundant native copper. These specimens are of premium quality and it is unsurprising that some of the finest chrysocolla and azurite comes from these mines as well. Australia, China and British Columbia also have significant deposits, though nowhere as large or of the same quality as Michigan and Arizona.

How Does Native Copper Form?

Native Copper is most commonly found in areas that have large concentrations of volcanic basalt. Other locations with high quantities are areas of hydrothermal replacement and/or oxidation zones. One trend that tends to hold true, is that most significant formations of native copper occur near sulfide deposits. Geologists speculate that the rich abundance of native copper on the Keweenaw Peninsula is linked to high sulfide concentrations that may have percolated from magmatic activity in the earth’s upper mantle.

A few notable associations are secondary copper minerals that form in oxidation zones above copper deposits. These are, malachite, azurite and chrysocolla. Native copper is also often found with a matrix of calcite or quartz, which is unsurprising, given that these are two of the most common minerals on earth. Cuprite, copper oxide, is also a common associate of copper in its natural state. The most unexpected of copper’s associates is silver. Silver is relatively hard to come by, but it is known to form in areas where copper has also formed, once again also potentially linked to sulfides. 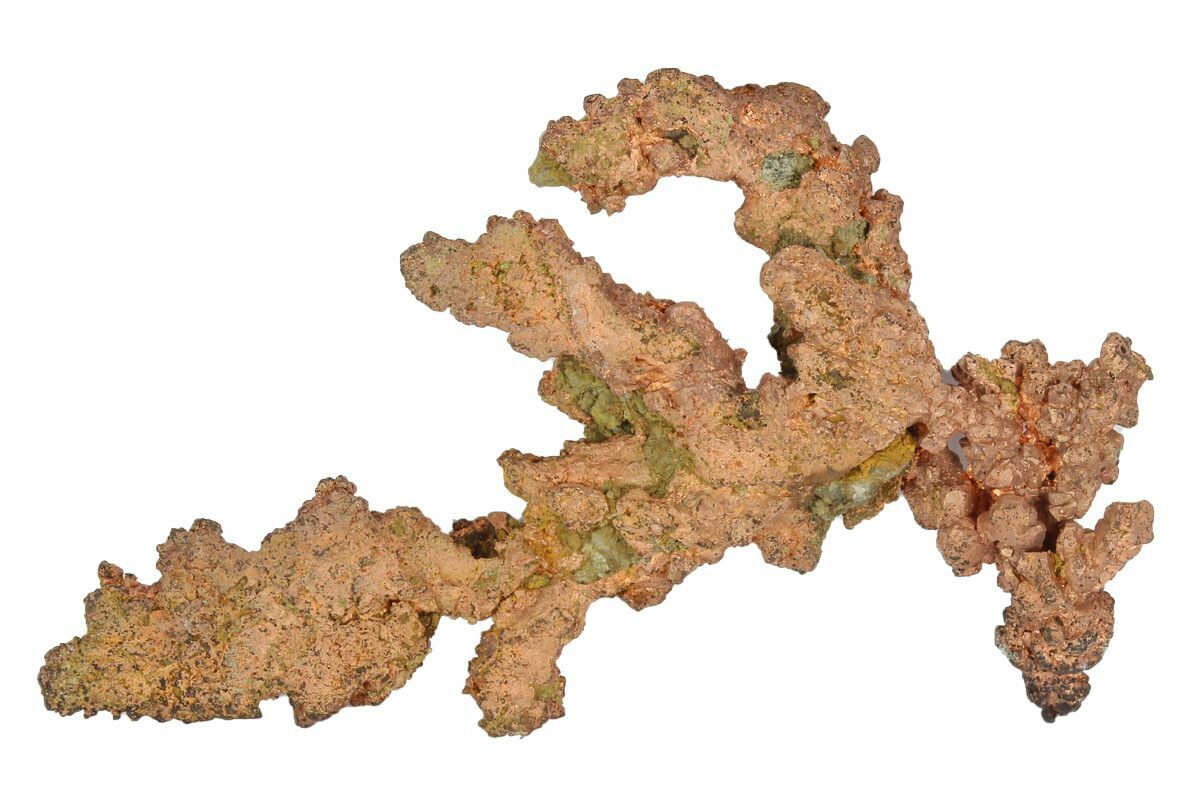