Found along the shores of Michigan's beaches, syenite rock rich with fluorescent sodalite (Yooperlite), sits like any other stone. Though easily mistaken for other igneous rocks, when exposed to UV light- bright pinks, reds, yellows, and oranges glow in veins and crystals around the syenite clasts. 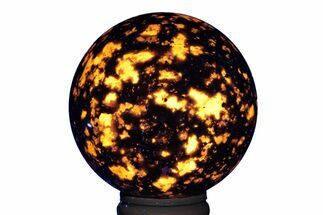 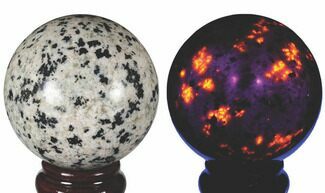 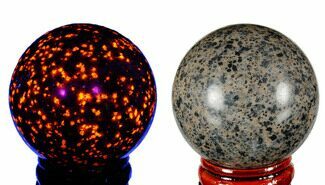 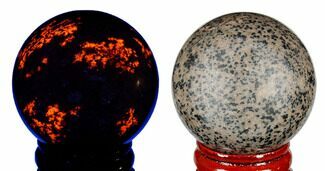 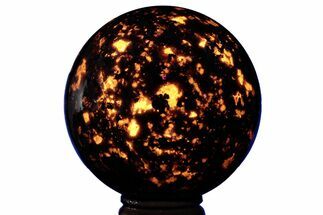 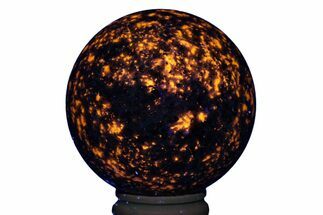 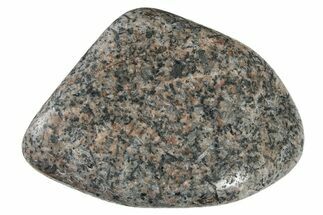 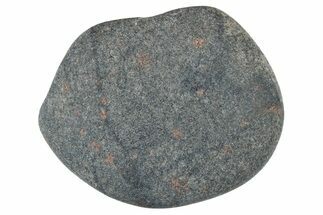 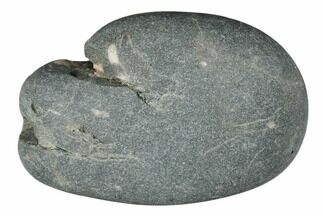 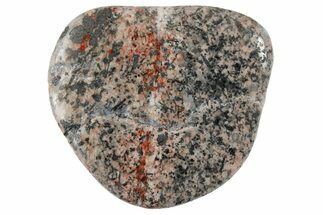 Yooperlite is the colloquial name for sodalite-syenite. This mineral looks like many igneous rocks, but when exposed to UV light, it will fluoresce a bright color: ranging from orange-to- red-to-pink. In the presence of long-wave UV light, the Yooperlite will glow red-orange or pink, and when placed under short-wave UV light, the sodalite glows orange or yellow-orange. 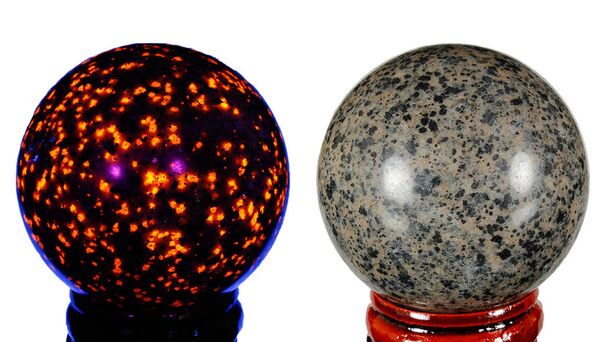 A polished sphere of yooperlite showing it under both natural light and under short-wave UV light.

Yooperlites are primarily found along the shores of Michigan's beaches, specifically along Lake Michigan and in the Upper Peninusula. While mainly collected in Michigan, there have been some specimens collected in Minnesota and near the other Great Lakes. Geologists believe that Yooperlite formed in the Canadaian Shield and over millions of years of glacial movement, deposited in the Upper Peninsula of Michigan.

The brilliant glow of a Yooperlite is a reaction of the fluorescent sodalite to UV light. The sodalite in the Yooperlite is absorbing electromagnetic radiation at the UV light wavelength and re-emitting it in a longer wavelength, which appears as yellow, orange, red, or pink. There are other minerals that fluoresce in the presence of UV light, including Petoskey stones (fossilized rugose corral), limestone, and sandstone, though these minerals do not glow with the same brightness or patterns as Yooperlites.

Yooperlites are not exactly rare, so much as they are only mainly collected in a very specific part of Michigan. The main aspect of Yooperlites rarity stems from its position as the only known appearance of fluorescent sodalite in Michigan, which was previously undiscovered. Sodalite is a fairly common mineral, but it is uncommon to be seen in this way.

Yooperlites (like other igneous rocks) form when molten rock crystalizes and solidifies. In the case of Yooperlite, these super-hot minerals are syenite and the feldspathoid, fluorescent sodalite. Sodalite is a very silica poor mineral that forms around other silica poor minerals, especially where no quartz is found. After the molten rock has fully cooled, sodalite-syenite is left behind. Millions of years later and after glacial dispersal and erosion, the small rounded stones litter the beaches of Michigan's Upper Peninsula.