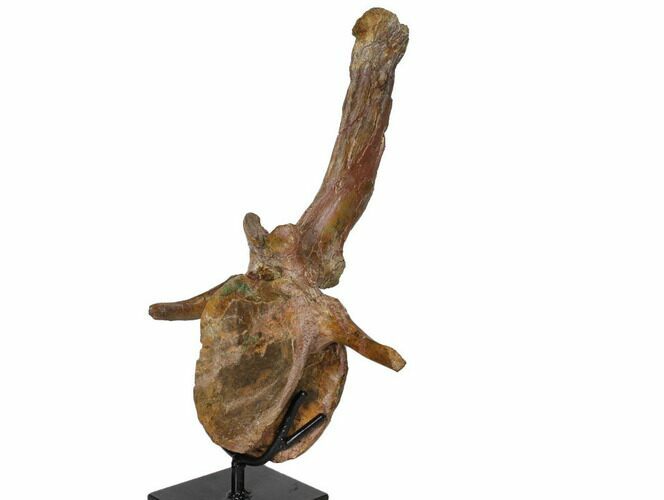 This is a beautiful 13.4" tall Hadrosaur (Brachylophosaurus) dorsal vertebra from the Judith River Formation of Montana. While this vertebra is squished/warped from the fossilization and geologic processes, it is still in great condition. The processes, centrum and points of articulation are present on this vertebra. The most significant restoration is to the spinous process where about half way up the bone was unrecoverable. Much of this process was shattered and has been pieced back together. The centrum also underwent some breakage and in spots has gap fill restoration. The transverse processes have repaired cracks and the right process has some gap fill restoration.

The Judith River Formation is one of the most prolific sources of Late Cretaceous vertebrate fossils. At least sixteen Orders containing more than forty Genera are known from the formation. These include fish, amphibians, mammals, and insects in addition to the reptiles, avian and non-avian dinosaurs (birds). Among the more interesting specimens is Leonardo, a mummified and fossilized Brachylophosaurus. This is a Hadrosaur, a duck-billed dinosaur with amazing preservation of the soft tissues of the body. The pattern in the skin of the feet is even preserved. In addition to Leonardo, the Judith River Formation contained the remains of the theropod Hesperornis, the only known freshwater Hespernorthid, a penguin-like bird.