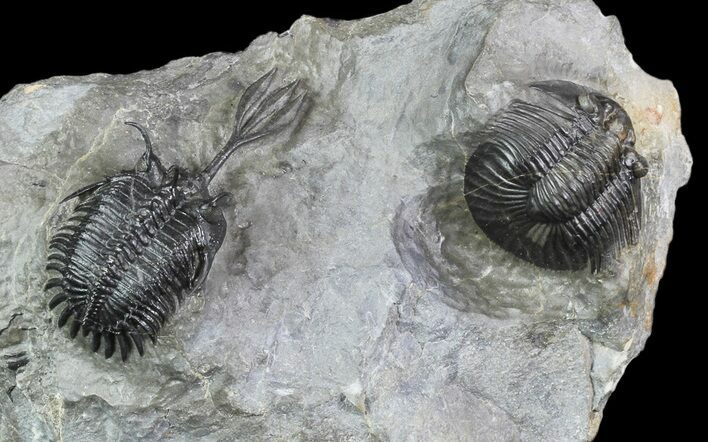 This is a gorgeous association of two nicely prepared trilobites. There is a 2.4" long Walliserops naturally associated with an arched Scabriscutellum. Nearly all of the Walliserops you see on the market are collected near Foum Zguid where this piece came from Msissi where they are much rarer. This specimen has a relatively shorter fork, and might be considered a different species from Walliserops trifurcatus.

This piece was prepared by one of the best trilobite preparators in the world and the quality of the preparation shows.

Morroco is an exciting place for discovering new and diverse species that lived in an ancient ocean that covered the northern reaches of the Sahara Desert. All three currently described species come from the same strata near Foum Zguid in southern Morocco, though other locations have yielded new trilobites to study. This region is hailed as one of the great fossil treasure troves in the world.
SOLD
DETAILS
SPECIES
Walliserops aff. trifurcatus & Scabriscutellum sp.
AGE
Middle Devonian (~350 million years)