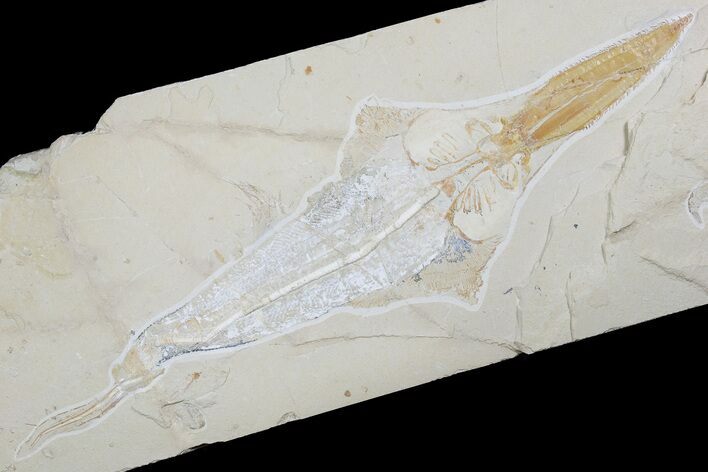 This is a spectacular 25" long fossil sawfish-like ray (Libanopritis hiram) collected from the Sannine Formation near Hjoula, Lebanon. It shows detailed soft bodied preservation and has been nicely prepared. Just check out all of the small rostral barbs that have been exposed. There are also several fossil shrimp associated with it on the 31 x 11" slab of limestone.

There is very minimal restoration to the piece along repaired cracks and the rock has been backed for stability. We can add wall mounting hardware to the back of the specimen upon request.

Libanopritis is a member of the sclerorhynchid family of rays. Members of this family are characterized by a nose drawn out into a rostrum lined with teeth. Despite their close similarity in appearance to modern-day sawfish (Pristidae), the two are not closely related, sawfish being instead grouped with guitarfish in the order Rhinopristiformes. Libanopritis would have swam slowly along the ocean bottom looking for prey. When resting it probably covered itself with the sand of the ocean floor like modern rays.

A photo of one of the quarries at Hjoula, Lebanon
FOR SALE
$4,495
DETAILS
SPECIES
Libanopritis hiram
AGE
Upper Cretaceous (~98 Million Years)