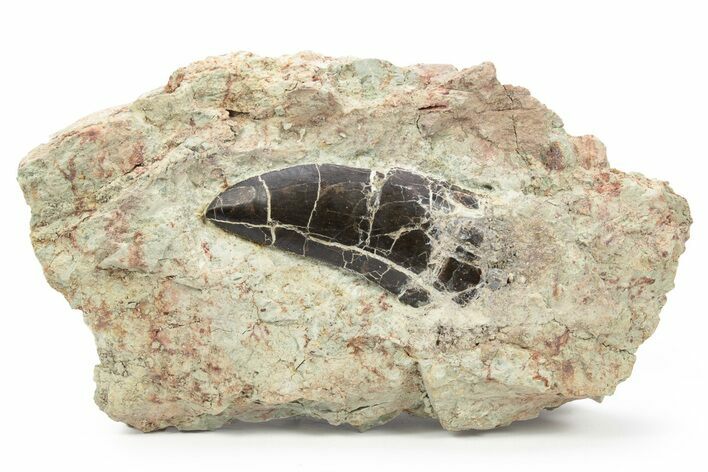 This is a serrated, 3.1" long, dark brown, fossil Carcharodontosaurus tooth from the Dekkar Formation in the Anoual Region of Morocco. The preservation in distinctively different than the more commonly seen Carcharodontosaurus teeth from the Kem Kem Beds several hundred miles to the South. It has been exposed from the rock it was found in to create this incredible in situ presentation. Both the distal and mesial serrations are present along the majority of the tooth.

Past the Turonian (93.9-89.8 mya), Carcharodontosaurus might have been replaced by the smaller abelisaurids in Gondwana and by tyrannosaurids in North America and Asia. The disappearance of carcharodontosaurids, spinosaurids and other fauna in Gondwana and across the world, suggests a global replacement event. Despite the event, fossils discovered in Brazil which appear to be carcharodontosaurids, indicate some survivors of this group until the latest stage of the Cretaceous.
View Jurassic World Fossils
Spinosaurus Tooth Buyers Guide
More About Spinosaurus
About Dinosaur Teeth
FOR SALE
$1,495
DETAILS
SPECIES
Carcharodontosaurus sp.
AGE
Late Cretaceous (95 million years)