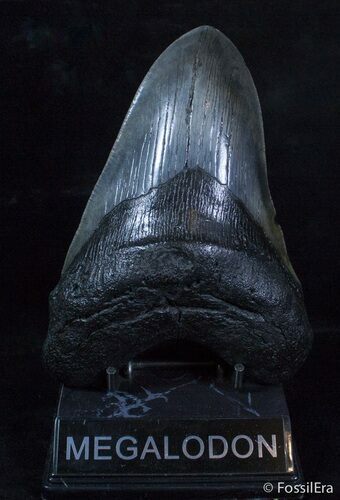 Here is a truly monstrous, 6+ inch Megalodon tooth which would have come from an exceptionally large adult of the species, possibly in excess of 50 feet. it would have been a true whale-eating terror some 5 million years ago. The tooth is heavy at just under a pound and nicely shaped. The serrations are worn are pretty worn as is the tip. The enamel is in great shape on the tooth. It comes with a custom "MEGALODON" stand to help show it off.

This tooth does have some RESTORATION work professionally done to the root and a small part of enamel in the corner on the left hand side. It's a really impressive tooth regardless.