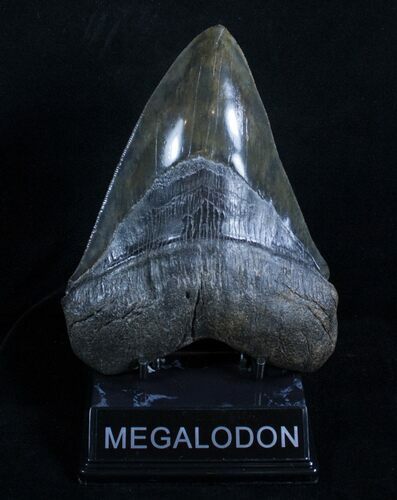 This is a BEAST of a Megalodon tooth at 6.19 inches in length and would have come from a shark approaching 50 feet in length. It's nearly 4 1/2 inches wide and weighs in at just under a pound. What makes it even more impressive is the serrations are sharp like a steak knife. They are very often worn in teeth of this size. The blade is all around in great shape and the enamel is beautifully colored.

There have been some restorations professionally done to the tooth. There has been restoration to the left hand side of the root, an enamel corner and to repair and enamel peel on the display side.

The tooth comes with the pictured custom display stand.