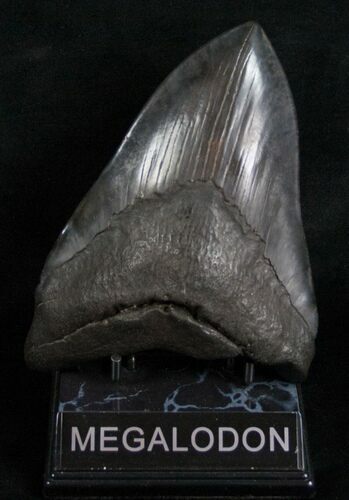 This is a HUGE Megalodon tooth at 6.19" in length. Very few Megalodon teeth got this large and it would have come from an adult shark nearing 50 feet in length. A true apex predator in the oceans, some 5 million years ago.

The tooth is a river find in Georgia and has a superbly preserved blade with great enamel. It's nicely shaped, the serrations are worn but visible and it comes to a nice point. The only real defect is that it's missing some of the bottom of it's root on the right hand side or else this would be a $1k+ tooth. It has no repair or restoration and is a very impressive display on the included stand.