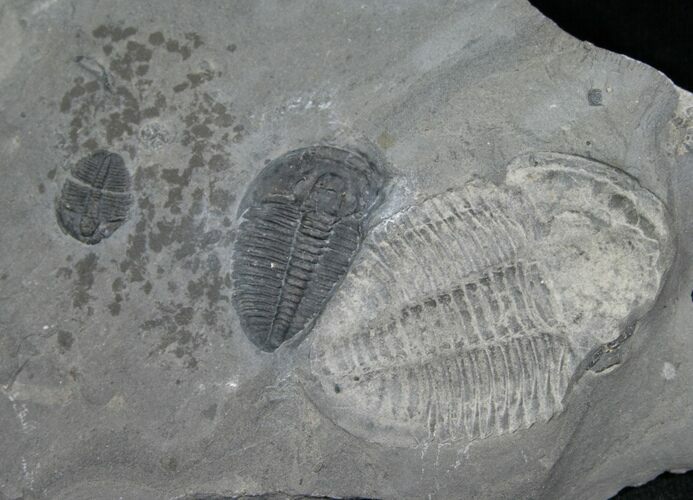 This is a well preserved Elrathia kingii trilobite from the 505 million year old Wheeler Shale of Utah. There is a second smaller Elrathia next to it, along with a negative impression of a large Asaphiscus wheeleri trilobite and cyanobacteria (Morania fragmenta). Unlike most trilobites collected at the quarries there this one was cleaned under microscope using air abrasives so it has much better surface detail.

The Wheeler Shale, a remnant of an ancient embayment where the ocean intruded into Utah, is perched in the strikingly arid and steep terrain of the House Range. Walcott awarded the areas limestone rocks and clay their title, but long before Walcott, Native Americans in the region regarded the trilobites with respect and appreciation. Today there are several commercial quarries operating in the Wheeler Shale including U-Dig where you can dig your own trilobites.
More About Trilobites
SOLD
DETAILS
SPECIES
Elrathia kingii, Asaphiscus wheeleri & Morania fragmenta (Cyanobacteria)
AGE
Middle Cambrian (505 Million Years)