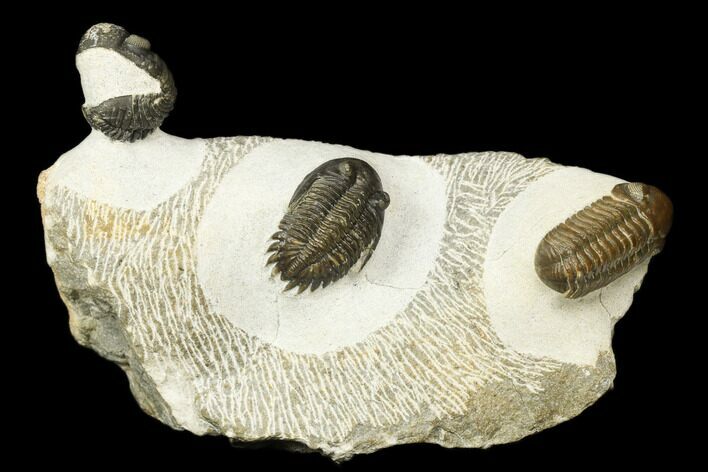 This is a fascinating, natural association of three different trilobite species. From left to right in the main photo there is a partially enrolled Adrisiops weugi, a Hollardops and a brown-shelled Austerops.

None of these trilobites have been composited onto the piece. Seeing different colored trilobites in close association or even to have a single trilobite have different shell colors is pretty common from many locations in Morocco. This is due to one trilobite or part of a trilobite being closer to either the surface of the rock or a seam allowing minerals to be leached from the shell, changing it's color.

Nice detail including eye facet preservation on all of the specimens. There is some shell weathering, particularly on the Adrisiops but no restoration.


Trilobites were a very diverse group of extinct marine arthropods. They first appeared in the fossil record in the Early Cambrian (521 million years ago) and went extinct during the Permian mass extinction (250 million years ago). They were one of the most successful of the early animals on our planet with over 25k currently described species, filling nearly every evolutionary niche. Due in large part to a hard exoskeleton (shell), they left an excellent fossil record.
More About Trilobites
SOLD
DETAILS
SPECIES
Adrisiops weugi, Hollardops & Austerops
AGE
Middle Devonian (Emsium Stage)