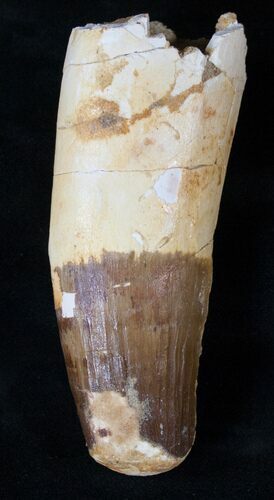 This is a huge 4.01" long tooth a Spinosaurus the largest known meat eating dinosaur. It's Late Cretaceous, approximately 95 million years old and from the Kem Kem Basin in Morocco.

This tooth is huge and would have been MUCH larger had the tip not been worn down due to feeding wear. It's rare to find 4+ inch teeth that are not composites or heavily restored. This tooth has a significant portion of root present and decent enamel preservation on the crown. There are several crack repairs in the tooth, but the only restoration is some gap fills in the cracks near the base of the root.