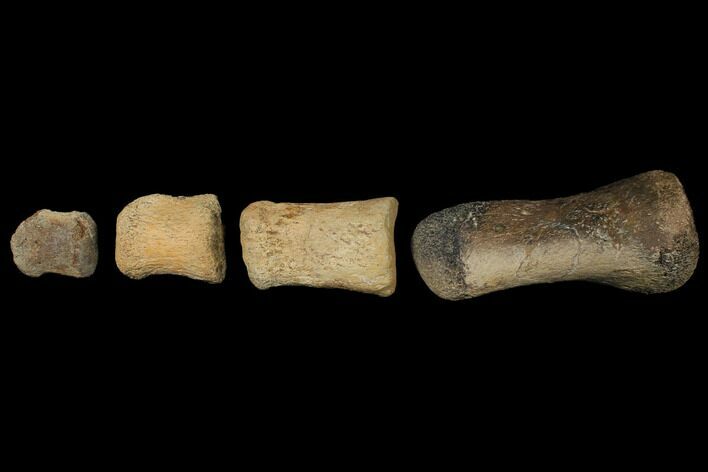 This is a nicely preserved set of four Hadrosaur finger bones from the Horseshoe Canyon Formation of Alberta, Canada. The bones are articulated, however the finger is a composite, consisting of bones from separate Hadrosaurs. They come from an unidentified species of hadrosaur and are Upper Cretaceous in age, between 65-74 million years old. The distal phalange is 1.2 x 1", the intermediate phalange is 1.6" long, the proximal phalange is 2.3" long and the metacarpal is 4" long.

Based on the number of bones, their size and shape, it's safe to say this would be the lateral finger of the Hadrosaur, comparable to a human pinky finger. This specimen comes with a Riker display case.

The Horseshoe Canyon Formation yields many different species of Hadrosaur that have been identified are Edmontosaurus, Hypacrosaurus, Parksosaurusa and Saurolophus. Due to the similarities of these dinosaurs and the unrecorded specifics from the original collector, individual bones, especially of the feet and hands, identification of exact species cannot be guaranteed.
SOLD
DETAILS
SPECIES
Hadrosaurus sp.
AGE
Late Cretaceous (74-67 million years)