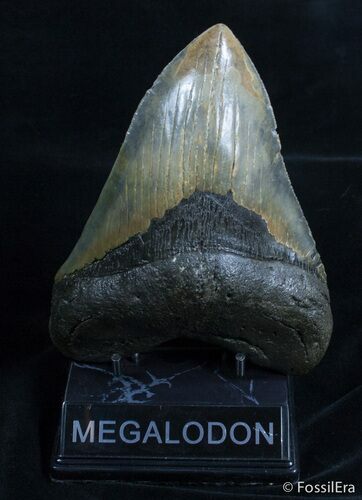 This is an absolutely GIANT megalodon tooth at 6.08 inches in length and weighing a full pound. It would have come from a very large adult Megalodon shark, probably in excess of 50 feet in length. The blade is beautifully shaped and has some great coloration. The serrations are pretty worn, but some of them are still visible.

This tooth does have RESTORATION which has been professionally done to the root and a corner of the enamel. The enamel is in great condition for a tooth of this size. It comes with the pictured MEGALODON stand to help show it off.