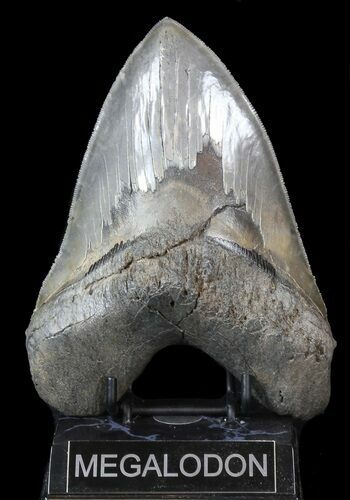 This is a an absolutely massive and razor sharp, 6.49" long Megalodon tooth collected on the South Carolina Coast. 6+ inch teeth are very rare to find complete and would have come from super-sized adult sharks in excess of 50 feet in length. They become incrementally more rare for every fraction of an inch of 6", so one that is nearly 6 1/2" long is pretty special.

This tooth not only is gigantic but it has razor sharp serrations and a excellent tip to it. The enamel preservation is glossy and like all of our meg teeth there is no restoration or repair. It comes with the pictured Megalodon stand. Don't miss this huge specimen, it's one of the largest Megalodon teeth we've ever had for sale.