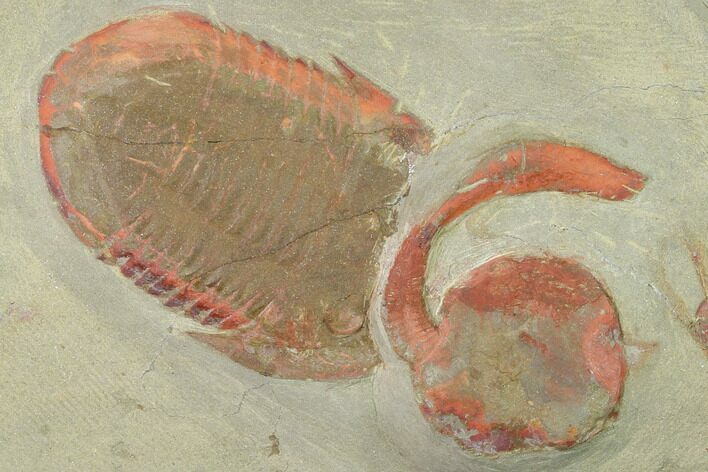 This is a reddish, 2.3" long Asaphellus trilobite from the Ordovician deposits near Zagora, Morocco. The orange coloration is due to the oxidization of iron pyrite. There is a unidentified carpoid preserved over the top of it.

Carpoids were an unconventional looking organism. The vital organs of the animal were contained in a theca. Internal organs were surrounded by calcite plates. Depending on the species of carpoid, one or two ambulacrum extended from one end of the theca. These were appendages for filtering water for food. A mouth was located at the base of the ambulacrum if there was just one or between them if there were two. From the other end of the theca, the three section stele (“tail”) extended. This was used either for locomotion or to hold the organism in place if sessile. That is fixed in one location. It is thought that carpoids grew up to about 4 inches (10cm).

Trilobites were a very diverse group of extinct marine arthropods. They first appeared in the fossil record in the Early Cambrian (521 million years ago) and went extinct during the Permian mass extinction (250 million years ago). They were one of the most successful of the early animals on our planet with over 25k currently described species, filling nearly every evolutionary niche. Due in large part to a hard exoskeleton (shell), they left an excellent fossil record.
More About Trilobites
SOLD
DETAILS
SPECIES
Asaphellus sp. & Unidentified Carpoid
AGE
Lower Ordovician