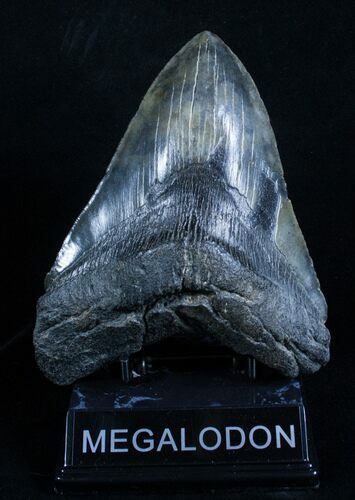 This is a HUGE Megalodon tooth at 6.08 inches in length and would have come from a truly monstrous prehistoric shark. Very few Meg teeth reach the magical 6 inch mark, so they are difficult to come buy. It's very wide and symmetrical, weighing in at 14 1/2 ounces. The root is a little worn on the reverse side of the tooth.

It has a beautiful dark brown-black color and the blade is nicely shaped with good enamel. The serrations are worn but still visible. It is completely natural with NO repair, restoration or polishing done to it.

It comes with a custom MEGALODON stand.