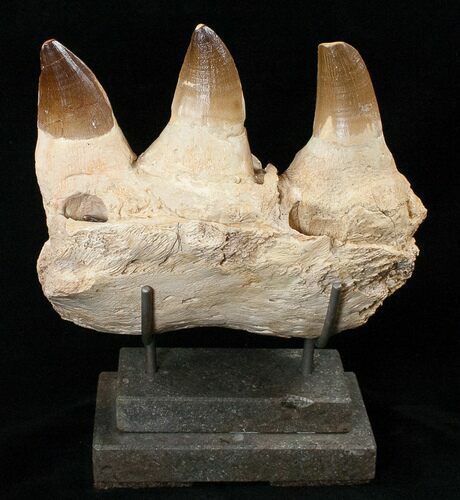 This is a truly awe inspiring fossil, a jaw section (yes, a real one) from one of the most fearsome predators to ever inhabit our oceans, a Mosasaur. It comes from the Upper Cretaceous, phosphate deposits in the Oulad Abdoun Basin of Morocco. The jaw section is 6 1/2 inches long and the largest tooth is about 3.6 inches including the root. The stone base is made out of fossiliferous rock and you can see fossils of Orthoceras (a straight cephalopod) in it.

Please Note: The teeth in this jaw are composites, that means both the jaw bone and the teeth are real fossils of Prognathodon but the teeth have been remounted in the jaw and may not have come from the same individual. It's pretty uncommon to find teeth still in their original place within the jaw, so nearly all fossil Mosasaur jaws have remounted/composited teeth.