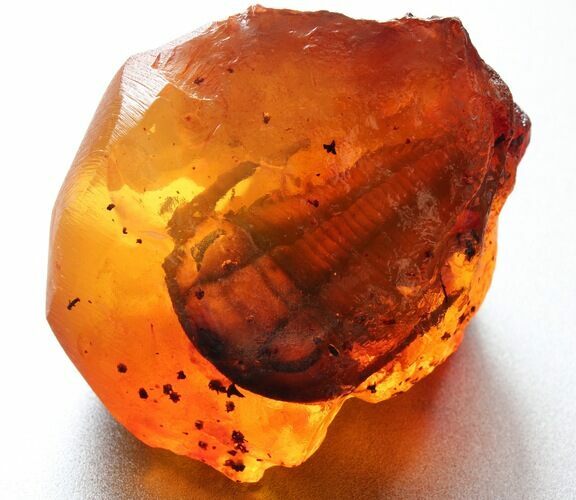 This is an amazingly rare, fossil Paradoxides contrafaco trilobite preserved in Baltic amber. Only a handful of these amazingly detailed specimens have ever been found. Even the finely preserved soft bodied parts such as legs and gills can easily be seen. It's a little known fact that during the Eocene period trilobites move out of the oceans taking on an arboreal lifestyle.

Yes, it was an April fools joke.

Judging from the volume of emails asking more questions about it or informing me it might be a fake a lot of people fell for it.

1. Trilobites went extinct during the mass extinctions at the end of the Permian, over 200 million years before the Eocene period. In fact the genus Paradoxides was a Middle Cambrian genus, so it was even older.

2. Given that trilobite were exclusively aquatic animals it would have been basically impossible to have one fossilized in amber which is fossilized tree sap.

3. The species name is "contrafaco", Latin for fake.

The photo is courtesy of 10 Tons studios in Denmark which does amazing zoological and paleontological models. It was also featured on the cover of Geology Today that ran an article on fake amber.
View Jurassic World Fossils
More About Trilobites
SOLD
DETAILS
SPECIES
Paradoxides contrafaco
AGE
Eocene (44 Million Years Old)