In 1985 the Utah state legislature designated fossils of Calymene celebra, a type of trilobite as the Wisconsin state fossil.

Trilobites are extinct, marine arthropods that were were one of the dominant life forms in our oceans for nearly 250 million years. They possessed a segmented body with a hard exoskeleton and jointed appendages. Many trilobites could roll themselves up into a ball for protection, much like modern pill bugs. There are tens of thousands of described species of trilobites. They filled many different environmental niches, some were predators, some ate algae, some crawled along the sea floor while some burrowed in the soft mud. Trilobites first appeared in the fossil nearly 540 million years ago, and disappeared during the mass extinction at the end of the Paleozoic era, 252 million years ago. Given their abundance and wide distribution in the fossil record, they are often used as “index fossils” to help date rock formations. 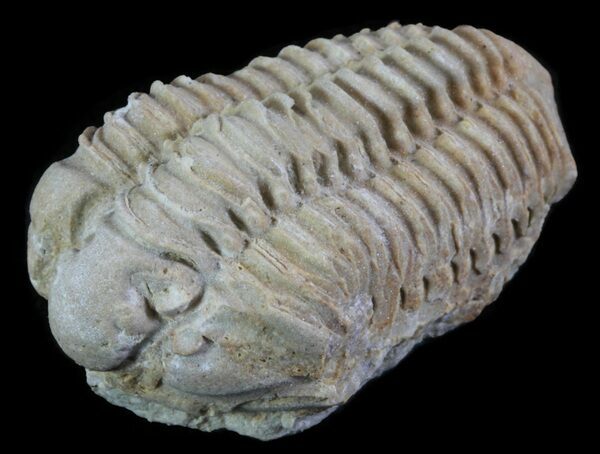 A Calymene celebra trilobite collected from the Niagara dolomite in neighboring Illinois.


During the Silurian period, about 430 million years ago much of Wisconsin was covered by a large, shallow sea. This ancient sea was home to many types of corals, brachiopods, crinoids and trilobites. The most abundant of the trilobites was a species known as Calymene celebra. This trilobite was about 2 inches long (about average size for a trilobite), had 18 or 19 segments, and large circular eyes.

The first Calymene celebra trilobite fossils were discovered in Wisconsin in the 1830’s by naturalist Increase Lapham. Since then, thousands of them have been recovered from the Niagara Dolomite which outcrops over much of eastern Wisconsin. Nearly all of the Calymene trilobites from this formation are preserved as internal molds of the fossil.

In 1982, Wisconsin geology buff Mark Shruilla campaigned to have trilobites adopted as the state fossil of Wisconsin. This sparked some controversy among paleontologists who thought designated a generic trilobite was overly broad. This would be like designating “dinosaurs” as a state fossil. They instead proposed naming the specific species, Calymene celebra as the state fossil. This controversy actually caused the bill to fail twice before finally being passed in 1985, and then officially being signed into law by the governor months later in 1986.