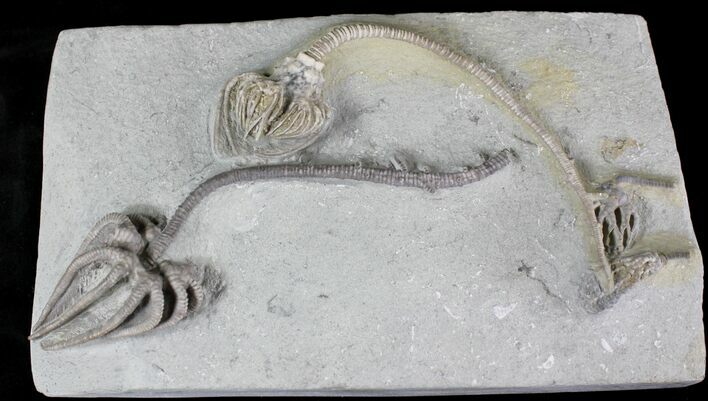 This is a great association of four different crinoid species from the famous Witherspoon Quarry near Crawfordsville, Indiana. The most prominent crinoid on the plate is a 5.6" long Agaricocrinus americanus. The other large crinoid is Actinocrinites gibsoni. The two smaller specimens are Histocrinus graphicus and Cyathocrinites opimus. All of the crinoid fossils are very 3d and nicely detailed. It was prepared under microscope using air abrasives.

There is some matrix restoration work at the top of the plate. The crown of the Agaricocrinus maybe a composite from another specimen, but it's hard to tell for sure.

Crinoids are commonly known as sea lilies, though they are animals, not plants. They are echinoderms related to starfish, sea urchins, and brittle stars. They attached themselves to the sea floor and had feathery, tentacle-like appendages which they used to capture particles of food. First appearing in the Ordovician period, 488 million years ago, they still survive to this day in deep water.
About Crinoids
SOLD
DETAILS
SPECIES
Agaricocrinus americanus, Actinocrinites gibsoni, Histocrinus graphicus, Cyathocrinites opimus
AGE
Middle Mississippian