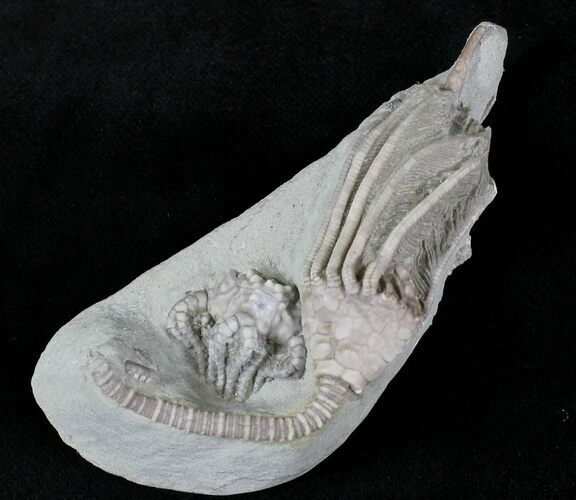 This is a very interesting crinoid association from the Witherspoon Quarry near Crawfordsville, Indiana. There is a 3" long Macrocrinus mundulus associated with a crown of a Platycrinites brevinodus. Both specimens are highly detailed and were prepared under microscope using air abrasives.

Crinoids are commonly known as sea lilies, though they are animals, not plants. They are echinoderms related to starfish, sea urchins, and brittle stars. They attached themselves to the sea floor and had feathery, tentacle-like appendages which they used to capture particles of food. First appearing in the Ordovician period, 488 million years ago, they still survive to this day in deep water.
About Crinoids
SOLD
DETAILS
SPECIES
Platycrinites brevinodus & Macrocrinus mundulus
AGE
Middle Mississippian