Outside of amethyst and fluorite, purple is one of the rarer colors in the mineral world. Below is a list of the few commonly encountered, purple crystals, and some of the rare ones.

Amethyst is a variety of quartz that can range in coloration from light, pinkish-purple to dark, grape juice purple. It’s vibrant coloration is due to the presence of trace amounts of iron inside of the crystals which have been naturally irradiated within the earth. It is found throughout the world with the majority of the supply on the market coming from Brazil and Uruguay. Amethyst frequently forms large crystals, crystal clusters and geodes and is very popular as a gemstone and decoration. 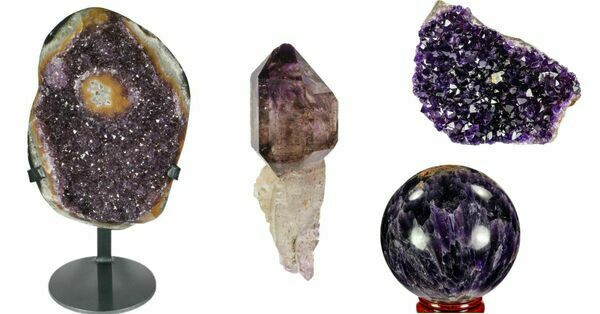 Grape agate is the name given to a purple, botryoidal form of chalcedony found in Manakarra on the Sulawesi Island of Indonesia. It forms in clusters that often resemble bunches of small grapes, and colors can range from pale purple to deep purple to green. It’s a fairly new mineral on the market, having been first exported from Indonesia in a significant quantity in 2015. 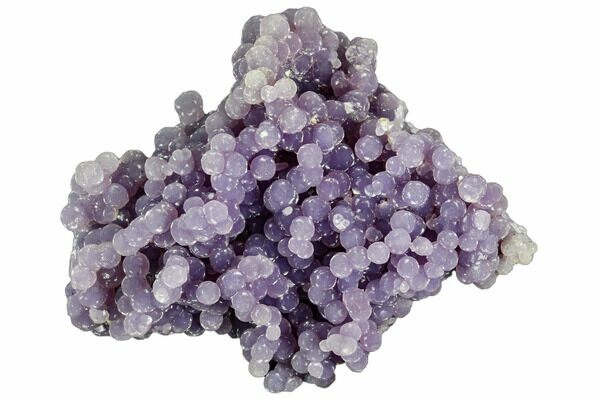 Charoite is a rare, translucent lavender to purple mineral that strictly is massive in nature (does not form individual crystals). It is found only in a single area in the Sakha Republic in Siberia. It has an unusual swirling, fibrous appearance and is sometimes chatoyant. Its appearance along with its rich coloration has led many to assume that it’s a synthetic mineral. In its rough form it’s fairly unattractive and it’s beauty isn’t apparent until polished. 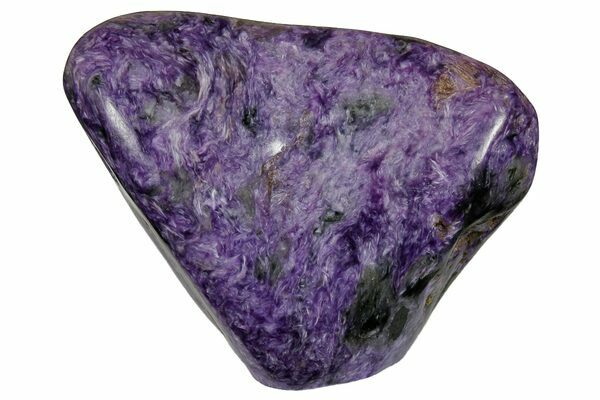 Lepidolite is a lithium-rich mica mineral that is usually pink to purple in color. It is fairly soft, so only lepidolite that is associated with much harder quartz is suitable for polishing or gemstone faceting. This mix of lepidolite with quartz often gives off bright flashes due to light reflecting off of the mica cleavages within the stone. 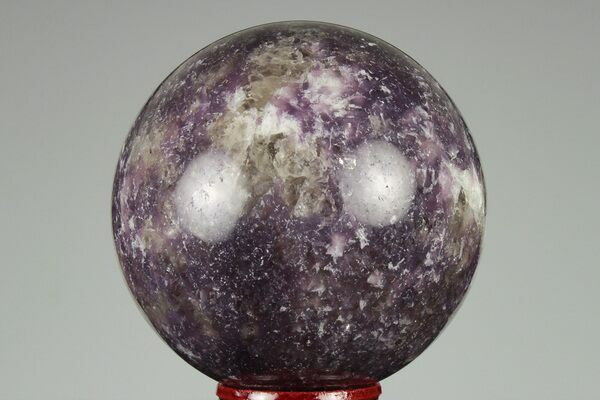 Fluorite comes in about every color of the rainbow, but purple is one of its most common colors. Fluorite is a common mineral, found in a large variety of crystal shapes including cubes, octahedrons, dodecahedrons and botryoidal forms. Some of the best purple fluorites come from China, Morocco and Illinois. Most fluorite will also glow (fluoresce) different colors under ultraviolet light, a phenomenon named fluorescence after the mineral. Besides purple, fluorite is commonly encountered in greens, yellows, and blues. 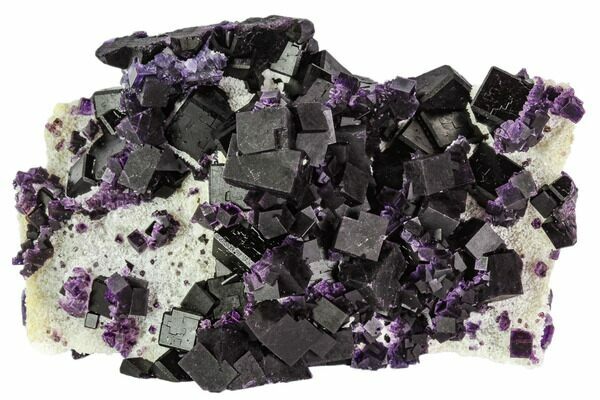 Ametrine is a rare, bicolor variety of quartz that has zones of amethyst (purple) in contact with citrine (yellow) within a single crystal. The name comes from a combination of AMEthyst and ciTRINE. It is also sometimes referred to as “bicolor amethyst” and “bolivianite”. It is almost exclusively found in a single Bolivian mine and a lot of the material coming onto the market from other countries is synthetic (made in a lab). 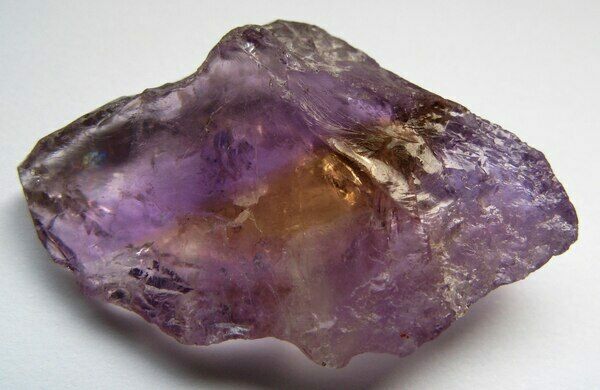 A piece of rough ametrine from Bolivia showing the purple and yellow zoning of amethyst and citrine.

Fluorapatite is a common phosphate based mineral that can be found in a variety of colors, with purple being one of the more unusual colorations. Purple fluorapatite can be found at Mount Marie near Paris, in Maine, South Dakota and Brazil. 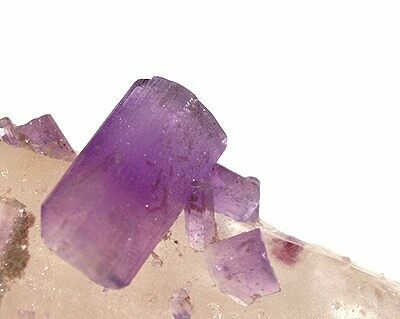 Kunzite is a pink to violet purple variety of the mineral Spodumene. It is considered a semi-precious gemstone and is often faceted for use in jewelry. Kunzite was described by George F. Kunz in 1903 from Pala, California but the majority of the material on the market today is mined in Afghanistan and Brazil. 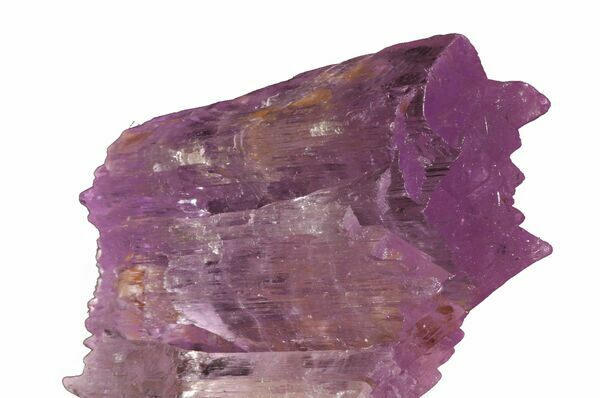 Smithsonite is often found as a secondary mineral in the oxidation zone of zinc ore deposits. It occurs in a variety of colors including light purple. 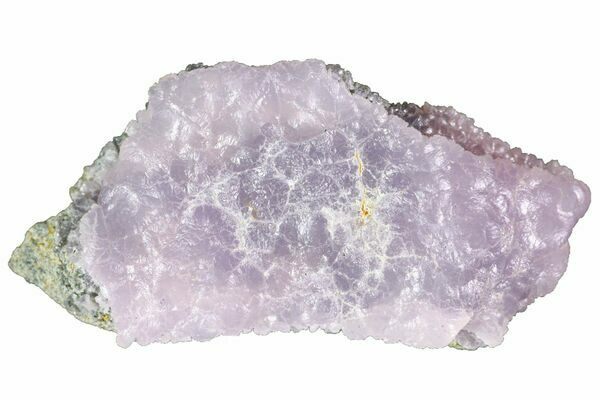 Sugilite is a relatively rare, grape jelly purple, cyclosilicate mineral that is most often used as a gemstone. Sugilite crystallizes in the hexagonal system with prismatic crystals, though crystals are rarely found and the form is usually massive. 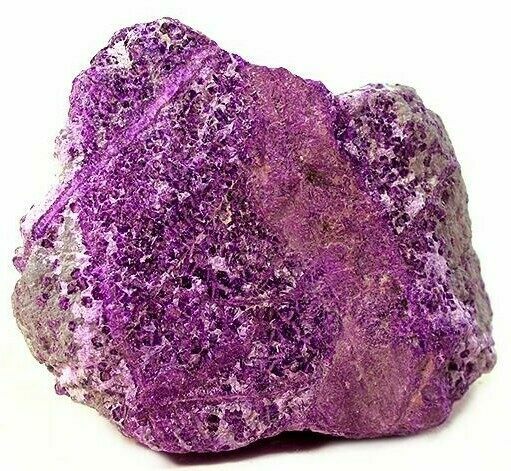 Taaffeite is an extremely rare mineral found in alluvial deposits in Sri Lanka and southern Tanzania. It forms mauve or lilac, red to brown, bluish, green transparent to translucent crystals. It was discovered and named after Richard Taaffe in 1945 who found the first sample as a cut and polished gemstone in a Dublin, Ireland jewelry shop. It is the only gemstone to have been initially identified from a faceted stone. 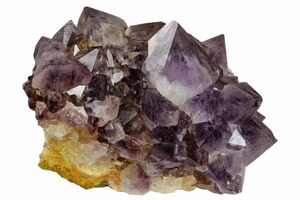